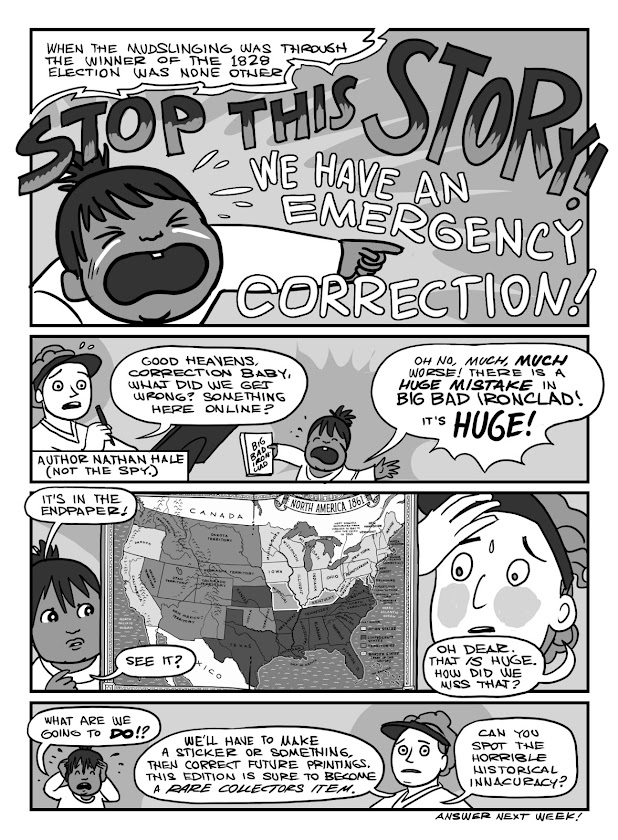 The usual Monday post is coming two days early. It's not every day you have a genuine Correction Baby Emergency. Can you spot the mistake. It is embarrassingly huge. The endpapers were done last, after everything else had been checked, re-checked, proofed edited and fact-checked. The endpaper falls under the "Decoration" category. You don't usually have to correct the "Decoration."

I was interviewed by School Library Journal's Good Comics for Kids blog this week. My answers were so long they had to make it a two-parter.

There's some top secret Hazardous Tales behind-the-scenes info in there. Check it out. Drop some comments on those interviews. And don't forget to post your reviews of ONE DEAD SPY and BIG BAD IRONCLAD to your favorite online review locations!

And let me give a big thank you to the folks at GCFK for the fantastic Hazardous Tales coverage!

And Marylanders, don't forget to stop by and say hi at this weekend's Baltimore Book Festival. I'm speaking on the Children's stage at 3:30 on Saturday. Hope to see you there!
Posted by Nathan at 7:42 AM 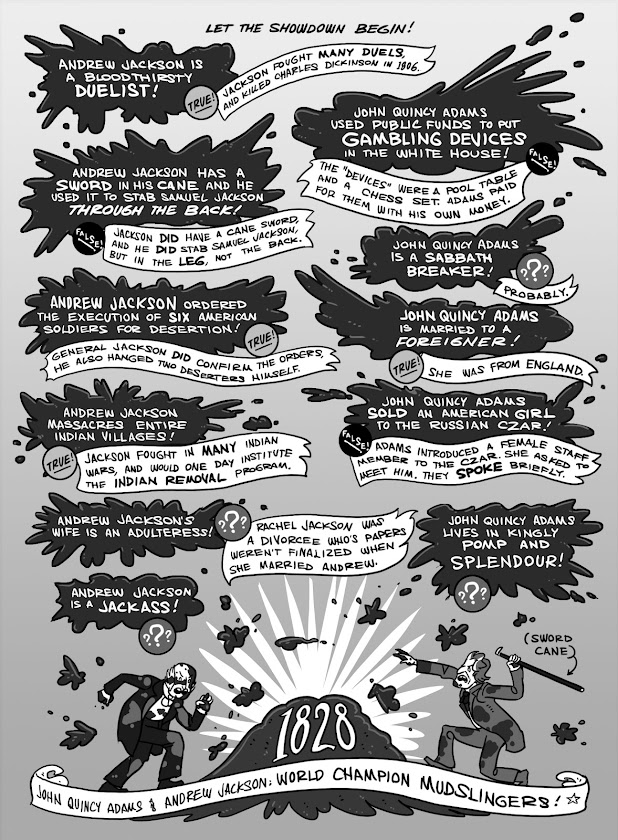 Next Monday, winners and losers, the final episode of the Throwdown Showdown.
Posted by Nathan at 12:45 AM

I'm very busy working on the next two Hazardous Tales books, but I'm prying myself out of the studio at last! I've got a few in-store author signings appearing in the near future.

At the Orem, Utah Barnes and Noble this Saturday (the 22nd) from 4-8, I'll be signing at the AUTHORPALOOZA!

And the week after that, on the 29th, I'll be at the Baltimore Book Festival! I'm giving a presentation at 3:30 on the kid's main stage. Otherwise, I'll be out drawing free drawings--just look for the guy with the giant General Washington hat with a Hazardous Tales pin in it.

More dates coming!
Posted by Nathan at 10:53 AM 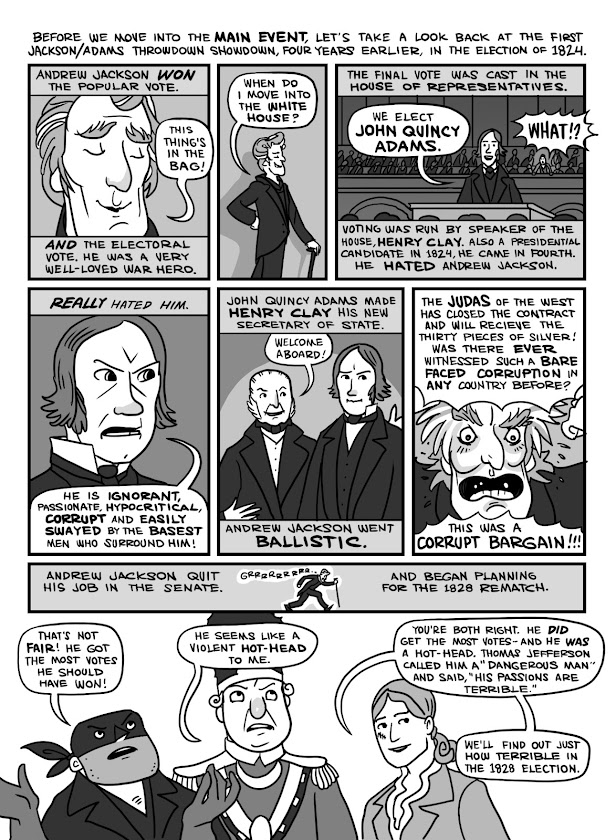 Mark my words, I will NEVER get tired of drawing Andrew Jackson's hair.

[Whoa! We had a visit from the CORRECTION BABY this morning. I had 1804 instead of 1824 in the first line. Sheesh! Anyway, it's fixed now. Thank you, CORRECTION BABY.]
Posted by Nathan at 8:57 PM

So there's a big Abraham Lincoln movie coming out this November (no, it's not the one where he fights vampires) it's called "LINCOLN" and it's from a guy named Steven Spielberg. Here's the trailer. Watch closely and see if you can see anyone from BIG BAD IRONCLAD (besides Lincoln himself.)


Pretty epic, huh? Looks like it could be pretty good, right? Here's what I think I spotted:

0:30--Could that be the burning of the Norfolk shipyard? I see big buildings, near water, on fire. Could the Merrimack be burning in there? (See pages 22-23)

1:17--Dead center, full screen, if that isn't our hero, Gideon Welles a.k.a. Father Neptune, I'll eat my hat. I actually went to imdb, and sure enough, Gideon Welles is listed in the cast of characters.

1:37--Now this is a long, long shot, but could this young soldier be Will Cushing? Probably not (I didn't see Cushing on the imdb cast list) but there ARE some cast members who's roles are blank--and some who are listed as "Union Soldier." Maybe, just maybe it's Cushing.

I didn't see any naval action scenes, but wow, did those battle scenes look intense!

How cool would it be if they showed the Monitor vs. Merrimack battle? If I see either ironclad in the movie I'll jump up a cheer like a maniac.

I invite you to shout as well.
Posted by Nathan at 9:15 PM 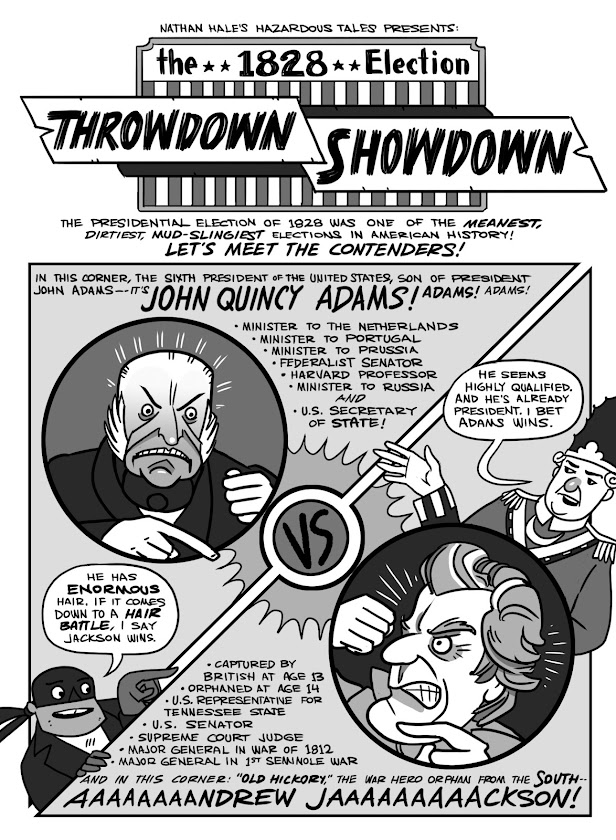 This will be a four page story. Tune in next Monday for part 2!
Posted by Nathan at 11:11 PM

(hrmm. Familiar)
And the face icon looks like this:

I'll be posting Hazardous news, artwork, author appearances, top secret information etc. there. So, if you are a Facebook user, and would enjoy that kind of thing--and commenting on that sort of thing--click here and become a fan! 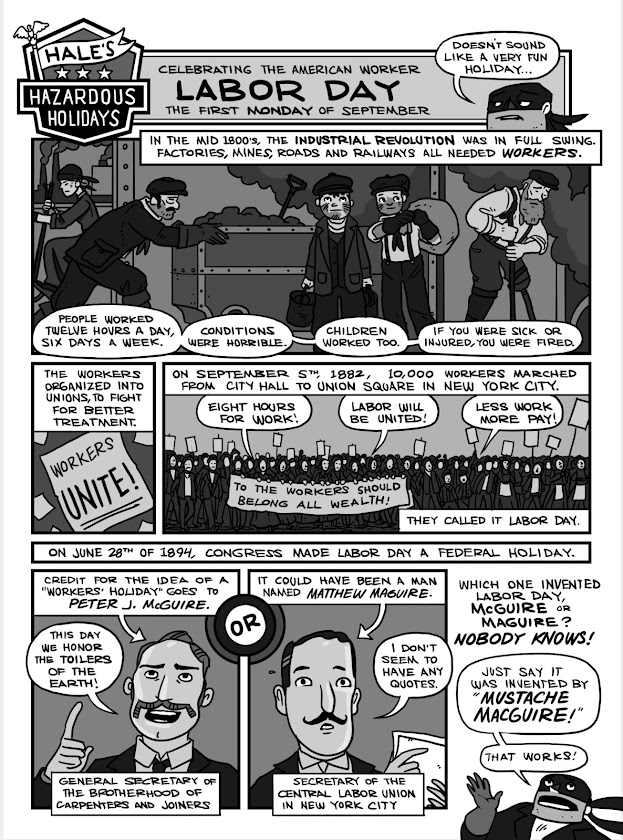 Here's a new feature on the Hazardous Tales blog: Hale's Hazardous Holidays, where we will take a look at the origin stories of various American Holidays. Labor Day isn't exclusively American--it's also celebrated in Canada.

Oh, and as a side note, if you draw comics for a living, you still work twelve hours a day, six days a week. Okay, I'm kidding, it's seven days a week.